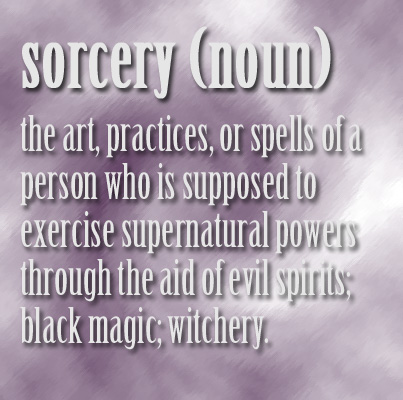 If you don’t know which witch is which, then perhaps someone is using sorcery to cloud your mind. Sorcery is a word that comes from the middle ages, a time of strong belief in black magic and witches. It derives from an earlier Latin word for “one who casts lots.” What’s of particular note is that the belief that it is aided by evil spirits.

From the idea that one can “cast lots” to aid in seeing the future to a strong belief that the aid must be tied to evil. Perhaps we all know that the future is not meant to be seen. Or, perhaps those who were sought to tell the future have been a long line of hucksters who use their “gifts” to tell us what they need us to hear, either dark, dreadful or hopeful, whatever that gets us to return to pay again and again.

If you enjoyed this post, look around, or sign up below ↓ to receive future posts via email.