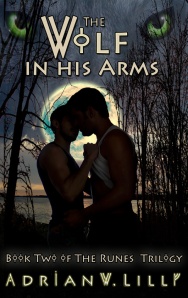 The Wolf in His Arms is the second book in The Runes Trilogy, due out in early 2014. As part of National Novel Writing Month, I’m sharing a recently written excerpt.

Rebecca sauntered up to a metal sculpture and circled it to enjoy the work from all angles. She tried to picture the sculpture in her warehouse loft, but couldn’t visualize a spot for it. It was fashioned from barbed wire and sharp metal—and while intriguing, it was also unsettling.

She was a regular at art openings at The Space, though she rarely bought. She enjoyed the ambiance—a solo cellist played, muffled laughter and conversation drifted through the rooms, artists discussed their work—and she sipped wine. Normally, her sister, Rindy, joined her, but tonight she had been away with work. Rebecca was startled as she heard a man’s voice behind her.

“What’s your opinion on this?” He asked.

She turned to face the owner of the deep, gravelly voice. He had sharp green eyes, thick, dark expressive eyebrows. One was arched with his question and he smiled warmly. “I don’t love it,” she said, then thought, Damn! He could be the artist.

“Hmmm,” he replied. He circled the sculpture, taking in its sharp, dangerous twists. “Angels bound,” he read the name of the sculpture. He raised his eyes from the name plate and looked at her through the barbed wire.

Rebecca looked at the sculpture again, seeing that the barbed wire in fact did seem to tie two angels, their sharp metal wings extended, together.

“I think it’s grotesque. And beautiful,” he said. “The artist sees the beauty in pain.” He extended his hand. “I’m Griffin.”

“Are you the artist?”

He laughed, the throaty rumble joyful yet unnerving. “No. Not at all.”

“I’m Rebecca,” she said, finally, taking his hand. “So, we disagree about this sculpture.”

“Perhaps we should look around together, to see if we agree on any.”

He smiled, a smile a little too confident. “Then we should go for a drink and find something to agree on.”

They chatted as they strolled through the gallery, commenting easily on the art, disagreeing amiably. After winding their way through the collection of prints, paintings, and sculpture, Griffin suggested they go for that drink and Rebecca agreed.

They walked from the gallery to a wine bar just a block away. He ordered an Oregon pinot noir and she ordered a gewürztraminer. Rebecca laughed at their selections, and Griffin smiled, noting the odd pair they made. While the conversation broke in fits and starts, Rebecca enjoyed his keen, intense eyes. He had a chiseled attractiveness, “super-model attractive” her sister would have called him. She couldn’t wait to tell Rindy about it, especially since they generally went to the gallery together.

The bar cleared out as the night wore on, and Rebecca finally announced that she needed to call it a night.

“May I have your number?” He asked. He pulled his phone from his pocket.

Rebecca smiled and rattled off her number. “Good night.” She felt elated as she walked down the empty street toward her car. She paused to look through the dark window of the gallery. She peered past her reflection in the glass to the sculpture of the sharp-winged angels wrapped in barbed wire. She gasped as Griffin’s reflection appeared in the glass behind her, but before she could scream he covered her mouth with his hand.

She smelled a pungent, chemical smell and fell unconscious, her hands that clutched at his arm falling limp by her sides as she slumped.

Rebecca tossed her head to the side and inhaled in a gasp as she awoke. A veil of confusion clouded her mind and eyes as her vision snapped into focus. Her senses grappled as she realized she was in the front passenger seat of a car. It was still night and moonlight poured into the car through the windshield though the world outside the car was dark. Too dark—and she realized she was no longer in the city but that the car was parked on the edge of a woods. Dread writhed in her chest like worms. She moved her arms and legs, thankful not to be tied. Her appendages were lethargic but waking.

“Ah, you’re awake,” Griffin said, looking at her from outside the car. He stood on the driver side and peered down at her. The moonlight illuminated only one side of his face and his dark smile vanished into the shadows covering the other side of his stony countenance. “I consider myself an artist, too.” His smile widened. “But of a very different sort.”

Rebecca painfully tore her eyes from his face to survey her surroundings: trees, a deserted road, no lamp posts. Isolation. She could no longer fight her panic and she tore at the door handle and fell to the ground outside the car. She clamored to her feet and ran toward the woods without looking back.

Griffin watched her race into the dark forest as he unbuttoned his shirt and peeled it off his muscular chest. He tossed it in the driver seat as he kicked off his shoes. “Run!” He screamed again as he unfastened his belt buckle and nearly pulled the button from his pants in his haste. He tossed his pants and underwear into the car then leaped over the hood. His bare feet slapped to the ground—and as he screamed her name his voice choked into a howl.

Rebecca heard the sound and stopped momentarily, frozen with fear. She had no idea where she was—what he was—making the horrible sounds that she now heard. Do not think, she told herself. Run.

She ripped through the darkness, stumbling, blind, half-mad with fear. The undergrowth slowed her, but she pushed through. She could hear something clamoring through the forest, gaining on her quickly. She willed herself not to scream, to run as swiftly and quietly as she could. Her mind screamed hide, but she knew the idea was futile. She stumbled onto a path. She looked both directions, each dark, stretching long into the forest. The moonlight broke through the tree’s naked limbs, casting shadows on top of darkness. She chose a direction and ran.

The cold air seared her lungs and she could feel her shoes tearing at her feet. They were not designed for running, for fleeing for your life.

She listened to the forest as she ran. Tried to see into the tree-shrouded vortex of darkness surrounding her. As she ran, she passed a trail mile marker. Three miles! Three miles to where?

Then suddenly the beast lunged onto the trail in front of her.

Fragmented pieces of reality assaulted her mind. Rebecca screamed and stumbled back. A large, clawed paw swiped at her, tearing her dress and shoulder. She didn’t even feel the lacerations as blood poured down her arm. She turned and ran yet felt another swipe down her back that made her wail. She stumbled yet still ran—and realized—this is the art. She is the art. The beauty in pain.

She knew she would not die quickly.