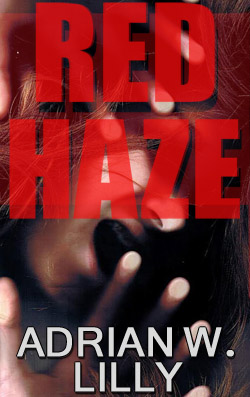 Red Haze is a haunting psychological thriller that hovers between the spectral and the natural, blurring the lines between remembrance and regret, dedication and obsession, justice and revenge.

“Fans of Lois Duncan (I Know What You Did Last Summer), as well as those who fondly remember the drama of college life, will find lots to like about Red Haze.” Kindle Book Review

“More than once I found myself on the edge of my seat, heart in mouth, awaiting an outcome.” Mallory Heart Reviews
“I found the investigation and the narration of the action scenes well-written. The characters are all likable, believable.” Bookingly Yours

The haunting quiet of the campus shifted over Marne with the cold January air. Most students would return to Grove University the following week, when the semester began. Rush Week, when hopefuls visited various sororities, ran the week before the semester started.

Walking through a campus not yet alive with the hum of students bustling to classes or chattering on the walks felt like a stroll through a long forgotten city. Though frost glittered on the grass and cold air slithered across her cheeks, Marne remembered the feeling of an abandoned Pueblo she had seen when she was a child on a family vacation. She and James sprinted through the sand, kicking up dust, and talked about the children who must have played there hundreds of years before them. Then they stopped, silent, and grasped the creeping eeriness that swept an empty, abandoned landscape. Though they had not told each other what they were thinking, Marne always felt that James shared her sentiment.

Empty spaces from that day forward reminded her of that one quiet moment.

Despite the cold, Marne stopped in the quad, near a fountain turned off for the season. The outstretched arms of the fountain’s stone maiden loomed above her, casting a V-shaped shadow on the pavement. Marne closed her eyes. She embraced the quiet, the aloneness. Concentrating, she could hear muffled laughter, and traffic, farther still. A tear slid from under her closed eye, and she instinctively reached up and swiped it, leaving a cold, wet smear on her cheek.

Marne opened her eyes to the harsh white morning light and grimaced. Still three days until the campus would be filled with students, including Sara. Marne missed Sara. The winter break felt long and arduous at her house. Marne had not looked forward to the holidays. Her parents threw their annual New Year’s Eve party. Every conversation, every moment shared with her parents felt like glass crackled and ready to shatter. Marne tired of watching her father slug down scotch and her mother pop prescription pills. Her family had become a farce and only she could see it.

Rush Week for Marne became an early escape—one encouraged by her mother. Her mother, Tabitha, was a Pi alumna, making Marne a legacy. Her mother reveled in the idea of Marne following in her footsteps.

“Why are you standing in the cold?”

Marne startled, though she recognized the voice. “Hey, Kip.” Marne smiled. Kip was a member of Brad’s fraternity. “I was just enjoying having the campus to myself before next week.”

Kip shoved his hands in his coat pockets. “I bet you’re not even checking out any other sororities.” Kip spoke with a bravado she could tell he did not feel, parroting Brad and the other fraternity brothers he worshipped. Marne detested Kip.

Marne chuckled. “The Pis are the only sorority.”

Kip nodded. “Good to hear.” His awkward smile split his lips. “I like the idea of you as our kid sister.”

The words stung her. Marne’s eyes narrowed, stern. “I’ll never be your kid sister, Kip.” She closed her eyes and turned her back to him dismissively. “Never forget that.”

She listened as his hurried footsteps retreated. She wondered, only momentarily, if Kip would mention the run-in to Brad. Marne smiled again, feeling the cold air tiptoe across her face.

The need for the next three days to pass shivered across Marne’s skin and she hugged herself. She walked toward her dorm to dress for the next event of Rush Week.

Marne was studying her face in the mirror, applying make-up, when someone knocked at the dorm room door. “Just a moment,” she called. The knock was unexpected, as the campus was still mostly deserted. The urban legend about the murderer in the dorm room and the dying roommate knocking for help popped into her head. Marne rolled her eyes at herself and walked to the door. “Who is it?” She asked before opening the door.

“Brad. You expecting another guy?”

Marne eased the door open and leaned her shoulder against it, blocking him from entering. “Maybe I already have another guy in here,” she teased.

Marne stepped aside, letting Brad in. ‘Don’t get any funny ideas. I’m ready for the sorority meeting tonight.”

Brad chuckled. “I just stopped by to walk you over.” He smiled. “But, now that you mention…”

Marne slapped his chest playfully. “I’ll get my coat.” She walked across the room and looked in the mirror again.

Brad stood by the door and a disapproving look crossed his face. “Sara’s side of the room is so”—he paused looking for a word—“proper.”

“Sometimes I think the only reason you want me to join the sorority is so we don’t room together anymore.”

Marne pulled her coat on. “Why don’t you like Sara?”

“Ha!” Marne huffed. “Sara? A bad influence? I study more because of Sara.” Marne shook her head. “No, you don’t like Sara because she’s smart.”

Brad raised his hands in mock defense. “Hey! I know you guys are BFFs.” He rolled his head back and forth. “I just think she’s a troublemaker. And she’s not as smart as she thinks she is.”

Brad pulled Marne close and kissed her on the nose. “She can’t stand me. How smart is that?”

Marne stifled a yawn and turned her head discreetly. A projector cast images of smiling children on the wall as Staci beamed about the money the sorority raised in the previous year for the Ronald McDonald House. The meeting tonight was to acquaint would-be Pis with the ebullient and charitable nature needed to be a member. The charitable acts, Marne admired; Staci’s self-congratulatory tone she did not.

A sister flipped the lights on and Staci continued. “Our theme this year is ‘One Planet. One World.’ All of our charitable causes revolve around the environment.”

Sisters and hopefuls alike clapped as Staci troubled to appear humble. A smug smile pinched her face and she instructed, “Feel free to mingle.”

Staci saddled up to Marne at the hors d’oeuvres table. “So what did you think?”

Marne raised her napkin to her lips and dabbed. “I found it rather informative. I wonder how you decide on a theme for the year.” She knew asking questions was good. It made her seem interested.

“I’m so glad you asked that!” Staci’s face split in a too-large-to-be-sincere smile. “We have a charity committee, but we vote as Sisters.”

Staci shook her head. “So, why didn’t you rush sooner? Your mother was a Pi after all.”

Marne was prepared for the question. “I really needed to focus on scholastics. I had a fear freshman year would be tough—and it was.”

“Hmm.” Staci ladled Marne a cup of punch then ladled one for herself. She asked, “Where did you go to high school?”

“I went to an all-girls Catholic school. Saint Drausinus. It’s about an hour from here.”

Staci chuckled. “You’re practically a townie.” She leaned in conspiratorially. “But I won’t tell anyone.”

Marne met her gaze. “So is Brad, remember.”

Staci snorted. “Duh.” She sipped her punch. “Brad went to a boy’s school, didn’t he?”

“I can see why you worried about your freshman year. Brad’s on the five year plan.”

“So, we’ll find out this weekend if we’re going to be asked to pledge?” Marne changed the subject diplomatically.

Staci trailed her fingers across her throat absently as a syrupy smile cut a thin line across her face. “Yeah, but you have nothing to worry about.”

“There’s always something to worry about.” Marne sipped her punch and gazed over the rim at Staci.

Staci held her gaze a bit longer than Marne felt comfortable with, so she turned away. She could feel Staci’s eyes still on her, an unasked question stagnant in the air. “Are we going to the Rho’s party?” Marne asked evenly.

Staci smiled. “As soon as we’re done here.” Staci swept her hand over the table. “Be a dear and help me start clearing things.”

Staci, Marne, and a few other Pis and rushes trudged into the cold night air toward the Rho House. The jubilant group chattered and laughed down the sidewalk. Bass and clamoring music from competing parties rumbled down the street and seemed to collide and wrestle over them. As they approached the Rho house, the sound of their music became deafening, drowning out all competing noise.

He watched from the woods. Silent. Still.

Darkness and cold drifted away, unknown to him. Hours ticked by and he waited. Branches, brushed by the wind, clicked against the trunks of trees. The phosphorous glow of the street lights washed the street and the students, huddled in bunches as they walked down the street, in ghostly white. This time of night felt real to him. Made him feel real.

Peals of laughter and hooting broke the silence of the night. As a door opened, music boomed onto the street and light danced on the faces of the newcomers to the party, a group of girls. Brad stood in the doorway in silhouette, welcoming the new partiers. His brusque baritone voice rose over the noise with a hardy welcome and drunken laughter.

The watchers’ eyes narrowed as hatred flooded his veins.

As the door closed, the shard of light from inside closed to a crack and died. He raised his hands to his mouth and blew on them to warm them.

One night, they would make a mistake. And he would be ready.